There are few things as epic as the ILE 18 — and the Star Wars saga might be one of them. Today in our travels we passed by several filming locations for the most recent installation of The Last Jedi! I think Brian and the staff were more excited by this than the students.

We all ate breakfasts and hauled ourselves onto the bus for an early day into the Dingle peninsula. It was a very similarly scenic day to yesterday. We stopped very briefly in the town of Dingle on our way in. It’s possible that we saw the splashing of Funghi the dolphin down in the bay, but we’re not sure. The boating tour of Dingle seems to be something we should put on our list for next year’s trip as a possible outing. 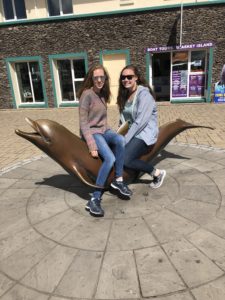 During our brief stop, Anna and a few others went into Murphy’s Ice Cream for waffle cones that were swiftly eaten before they could be brought onto the bus. I know the students were mentally planning what they would do next when we came back later, and more ice cream seemed to be at the top of the list.

Boarding the bus again, we drove through the crags of the peninsula and dodged sheep. The views were spectacular and we could see Skellig Michael on the bright blue horizon. Joe and Clare joked about rowing out to the island to explore, the counselors clutched their seatbelts a little tighter.

The great thing about having a group that is on the smaller side is that we have such flexibility and instead of going to our usual haunt of Inch Beach, we went to the smaller and wilder Coumenoole on Slea Head. According to the signs, a view panning shots were taken here for Star Wars! This is where a few scenes from Ryan’s Daughter were shot as well. The beach was bordered by rock formations and filled with lovely golden sand. 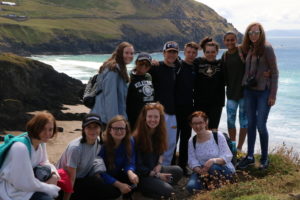 Joe, Caitlin, Issie and Ethyn jumped in the water almost immediately, which was approximately one degree above its usual freezing temperature. After deliberation and consternation, others poked their toes in and ran back out with shrieks. 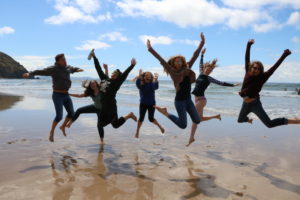 Anna and Mairead made some beautiful sandcastles sheltered by the worn black rock during their free time. Others sunbathed, including the staff. Lunches were eaten. Brian imprecated us harshly about bringing sand back onto his bus, so we washed off our feet in the tide pools before walking back up the cliff. 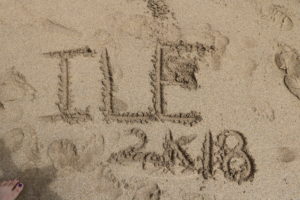 We drove back in a loop to Dingle proper again, after stopping at Ceann Sibeal for another epic Star Wars view, complete with official plaque. The students had lots of fun dancing on the coast and taking in the sea breeze. Once in Dingle, students went back for seconds at Murphy’s, looked at sweaters and took in the small, vibrant town. Anna also met a young man who worked at the ice cream place and happened to fall deeply in love with him much the amusement of everyone involved.

Ah youth. We headed home to prepare one final dinner in Killarney before we move to Galway. The counselors slept the sleep of the just after a beautiful and energetic day. 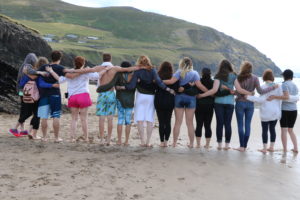