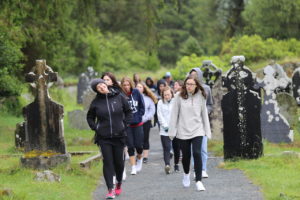 The wheels of the airplane came to a screeching halt and before the #ILE17 Group knew it, they were in Ireland on the morning of June 30th. Bright eyed and bushy tailed, they meandered through the halls of Dublin Airport until they came to Customs. After a few important questions, most of them received their first official stamp in their passports. The first of many-hopefully.

After the students had collected all of their bags, we exited out of Security and were greeted by Angie (Who is the Coordinator on the Irish side-teaches Irish literature, loves singing lullabies, and giving the students loads of sweets.) and Michael (Who teaches Irish and Irish American history.). Introductions were made and hugs were exchanged. Angie led the group outside to their chariot-a luxury Barton’s Coach-that would bring them to Newtown Boarding School. 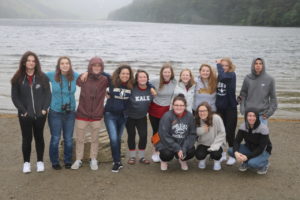 Waterford is about a 3 1/2 journey from Dublin, so the ILE headed to the first tour of the trip. Some couldn’t wait to get some fresh air and stretch their legs after flying all night. Many were forcing themselves not to fall asleep, so a few started counting the sheep dotting the green rolling hillsides to distract themselves.

The first stop was Glendalough, in County Wicklow and in the thick of the Wicklow Mountains-one of Ireland’s most beautiful destinations-according to many ILE alumni.

For thousands of years people have been drawn to “the valley of the two lakes” for its spectacular scenery, rich history, archaeology and abundant wildlife. Many say that Glendalough is a remarkable place that will still your mind, inspire your heart, and fill your soul. 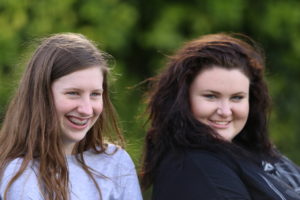 Glendalough is home to one of the most important monastic sites in Ireland. This early Christian monastic settlement was founded by St. Kevin in the 6th Century and from this developed a Monastic City.

The Monastic City consists of a number of remains and the most impressive being the Round Tower which stands almost 100 feet high. The grounds are entered through the Gateway, which has two round headed granite arches and then the main group of monastic buildings lies downstream near the Round Tower.

Beyond St. Mary’s Church is the Priest’s House, a 12th Century building in Romanesque style, with an interesting carving of a much earlier date on the lintel of the doorway.

Just beyond the Priest’s House is a large granite Celtic cross and the Cathedral, the largest church on the site, with a nave, chancel and sacristy, and St. Kevin’s Church.

St. Kevin’s Church is commonly known as St. Kevin’s Kitchen. This is a barrel-vaulted oratory of hard mica schist with a steeply pitched roof and a round tower belfry.

Michael did a great job pointing all of these points of interest out to the students and the most popular subject for pictures were the gorgeous Celtic crosses. 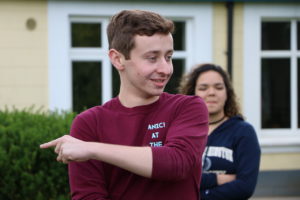 The group took a stroll to the Upper Lake and many were in shock when they saw whitecaps on the water and felt a chill in their bones with the frigid wind and typical Irish mist. They took a quick picture along the shores and then made the trek back to the Visitor Center. “You can never cross the ocean unless you have the courage to lose sight of the shore,” Abby said. What an appropriate quote for the day!

Rose from New York looked a little concerned and asked if Ireland is always this cold. The ILE Staff assured her that she would definitely see at least a day or two (Maybe more.) of sunshine over the next few weeks. Fingers crossed;).

Once back at the Visitor Center, the group were treated to their first packed lunch of the program-complete with a piece of fruit, Taytos, a sandwich, and a Kit Kat. Yumzers! They then boarded the bus and headed south again straight to Waterford.

Once in Waterford (Up the Deise!), the group received a warm welcome to Newtown Boarding School from Scones, the Gaelic and Irish studies teacher. They were given a tour of campus and then got settled into their rooms and had the chance to freshen up with some not-so-warm showers. They were also given the opportunity to deposit money and passports into the Irish Life Experience Bank and then it was time for tea. Tea included a well balanced meal of pork, stuffing, and vegetables. 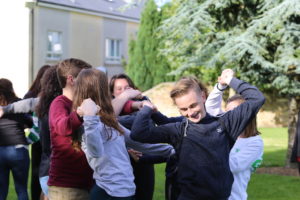 After letting their food digest, it was time for a few ice-breakers. The first ice-breaker consisted of students gathering in a circle and either left or right patting their shoulder in the direction the “pat” was directed in. If a student put one hand on top of the other, it would switch direction to the hand that was on the bottom. It was a game that required a lot of focus, so it was comical to see the students concentrating after their jet lag was setting in. It came down to Lauren from California and Counselor Casey, with Casey winning with a rock, paper, scissors shoot out.

The group was then split up into pairs and given a minute each to interview one another. After 2 minutes, everyone introduced their partner to the group. We learned some great facts about everyone… We found out that Bridget and Rose have the same birthday…, maybe because they are twins;). We also discovered that Brigid from Indiana is an Irish dancer, Scones tells only true stories, and Peirce loves theatre performance.

The final activity of the day was arranging the students into two circles and joining hands across from one another-to create essentially a human knot. They then raced around the clock to see if they could unravel themselves from the knotted mess without letting go of their grasps. Each team ended up having a win, so we called it a tie.

By the time 8:00 PM rolled around, the students were ready to hit the hay and crash for a much needed night of sleep! Their first day in Ireland had sadly come to an end.