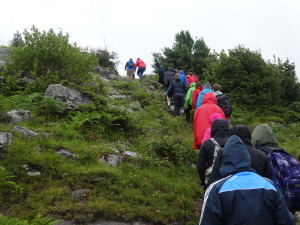 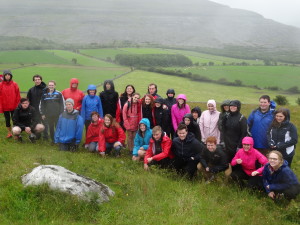 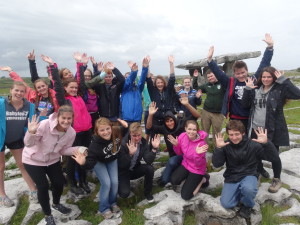 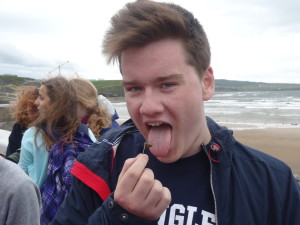 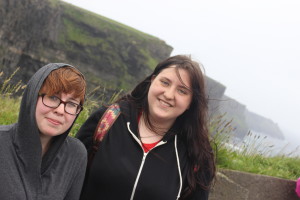 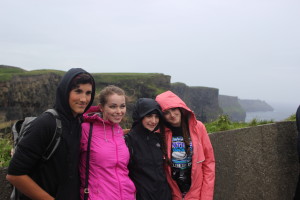 We have officially been in Ireland for 20 days! Alice and Ally can’t believe how quickly the days are flying by. Our first morning in Galway started with the arrival of our good friend and bus driver, Brian, from Burren Coaches. As we loaded onto the bus, Brian greeted us by playing the #ILE15 theme song, “Uptown Funk.” The dance party didn’t end there; Taryn plugged in her iPod to present the #ILE15 playlist to the students! The staff and students danced and sang along to “Galway Girl,” “Wagon Wheel”, “Wannabe,” and Johanna and Molly personal favorite, “You Don’t Know You’re Beautiful.”

Today the weather was not in our favor. However, that didn’t stop our spirts. Our first stop of the day was in the Burren, located in County Clare. The students oohed and aahed at the rocky countryside. Taryn made sure to tell the students not to take the limestone scenery for granite. The students dressed in some rain gear provided by Burren Hikes to help out with the torrential down pour. Then our burley tour guide, John, brought us on a lovely hike through the mountains that are owned by his family. The baltic weather with lashing rain (#AccordingtoAngie) didn’t damper the students’ sense of humor. During the hike, John showed the group the wild Juniper, hazelnuts, and thyme that grow on the mountainside. Laura curiously asked, “Do you ever run out of thyme?” Her pun was especially appreciated by Taryn, the Pun Queen herself!

After the hike, the students sat happily in the nearby café drinking hot chocolate and eating delicious homemade desserts. Aiden said that the pie he ate was the best he ever had! Before we left the Burren, Brian’s four lovely children, Shona, Mia, Eoghan, and Noah joined us for the rest of the day’s journey.

The next stop was the Poulnabrone Dolmen, an ancient burial chamber in County Clare. This ancient tomb was constructed during the Neolithic era. During the excavation of the Dolmen, 22 bodies were found at the burial site. Angie educated the students on the history and the magical fertility powers that the Poulnabrone Dolmen also possess. Cate, Clare B., Clare M., Johanna, Josey, Molly, and Siobhan were eager to increase their fertility and ran around the Dolmen ten times clockwise. Robert made it around three times, which may result in a goldfish instead of a child (#AccordingtoAngie). Amelia and Scones ran the opposite direction, hoping that they would become less fertile.

We then headed onto Kilfenora for a quick bite to eat, and to Lahinch Beach, the surfing capital of Ireland. Luckily, there were a couple of young, strapping lads who were selling periwinkles on the shore. Periwinkles are delicious, fresh snails from the cold waters of the Atlantic Ocean. Ben, Cate, Evan, Johanna, Josey, and Molly eagerly ate the periwinkles. Ben said, “Wow, it tastes like a snail!” Many of the students explored the beach and got ice cream before the short drive to the Cliffs of Moher. Rebecca said she enjoyed drinking her delicious Oreo Milkshake and strolling along the beach shore.

The rain started up again when we arrived at the Cliffs. Carley, Julia, and Sheila thought the Cliffs of Moher were absolutely breathtaking. Owen was a bit upset that he didn’t get to see his favorite animal, the Puffin, which often frequents the area. But, he was able to enjoy the Puffin photos at the visitors’ center.

After a long, rainy day, the students were excited to sit on the warm bus and go back to their apartments. The students ended their day by cooking meals and enjoying each other’s company. We’re excited to see what adventures lie ahead tomorrow!