Despite the lack of sun, the day began temperate and continued that way. The sky was washed with grey clouds but instead of dulling the natural beauty of Connemara, it enhanced it. This is the place where sky meets water and earth in the most spectacular of ways. We hit the road bright and early. Fortunately, we seemed to miss most of the Irish traffic (sheep) but students were still startled to see so many sheep eating casually on the side of the road.

Now, Connemara is not a county but rather a cultural region in County Galway. It is predominantly Gaeltacht (an area where the primary language spoken is Irish Gaelic). Michael would point out these signs to the students to hear the responding roar from the back seats of “Dia duit!”

Our first stop was to stretch our legs at the monument constructed in 1867 in remembrance of nothing actually happening. The students got a real kick out of this and Ethyn asked why it was even built then. 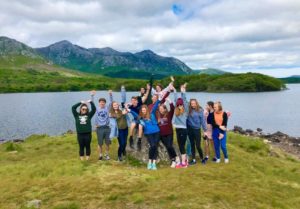 The second stop was similar. We paused on the shores of a lake to stretch our legs and take photos. Joe, Ethyn and Clare skipped stones across the water.

From there, we drove to Kylemore Abbey. Now typically, we hike up to the Sacred Heart statue (fondly referred to somewhat sacrilegiously as “Jimmy Jesus”). But unfortunately due to heavy rains in the winter, the trail is under reconstruction. Students ate or bought lunches at the cafe and spent a pleasant half hour in the gift shop.

After Kylemore, we went into Clifden for shopping and leisure. Some students picked up sweet treats here to supplement their lunches while others found Prendergast’s Antiques. The stores selling traditional sweaters were big hits, as was O’Dalaigh Jewellers. Anna found a small fairy house outside a store, complete with miniature surfboards. 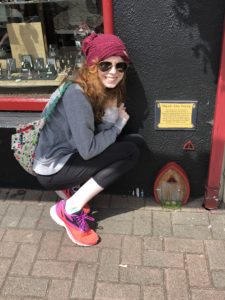 We drove out into the hillside to visit our final stop for the day: Dan O’Hara’s Homestead. The cottage here is a rebuilt replica of the original which was a pre-famine farm destroyed by an angry landlord. If anyone knows the traditional Irish song “Dan O’Hara” or “Dan from Connemara,” well, here is the origin place of Dan himself. 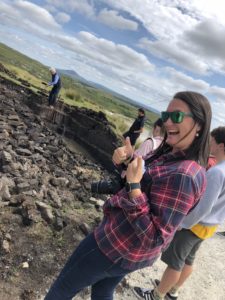 Martin, the groundskeeper/owner of the homestead, drove us in his tractor up the hill to the cottage and told us about the history of the region in great detail. We discussed technology, emigration and language and it was enthralling. Before entering the cottage he demonstrated the art of cutting turf using a slean, which is a traditional tool. Ethyn, Joe, Anna, Clare and Mike all tried it and did very well! Around us, chickens foraged and the three donkeys here at the cottage actually broke out from their pasture and ran amok. Inside the cottage, Martin told us what life would have been like for Dan and his family. 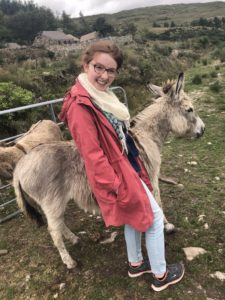 After saying a final goodbye to the donkeys, Martin’s tractor pulled us back down the hill and we boarded the bus back to Galway.