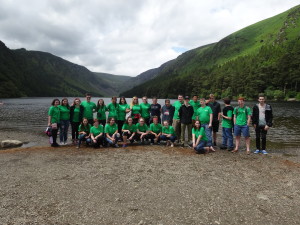 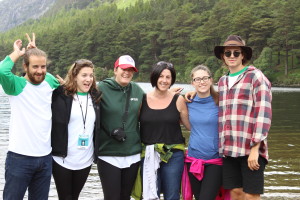 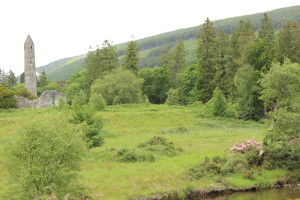 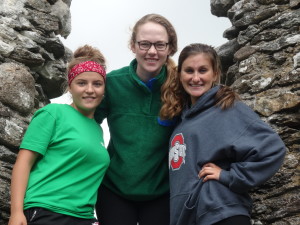 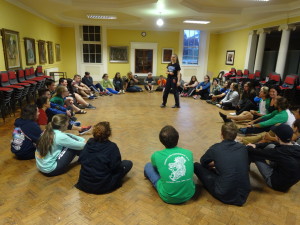 After the ILE boarded the bus, they started making their way to Waterford. This is where they would call home for the next week.

Since it had been a long night/day of traveling, the ILE Team thought it would be nice for the students to enjoy a packed lunch and stretch their legs with a stroll around Glendalough.

Angie, Kent, and Taryn drove down with the lunches. Kent was a little nervous, as this was Taryn’s first time driving on the other side of the car and on the left side of the road in a year. However, he was very impressed with her abilities.

The students decided to take advantage of the weather, while nibbling on PB and J sandwiches, fruit, and Kit Kats. Yumzers! Angie then gave a fantastic tour to the students. They learned that Glendalough, means “The Valley of the Two Lakes. It is a glacial valley in County Wicklow. It is renowned for an early Medieval monastic settlement founded in the 6th century by St. Kevin.

Kevin, a descendant of one of the ruling families in Leinster, studied as a boy under the care of three holy men, Eoghan, Lochan, and Eanna. During this time, he went to Glendalough. He was to return later, with a small group of monks to find a monastery where the “two rivers form a confluence.” Kevin’s writings discuss his fighting “knights” at Glendalough; scholars today believe this refers to his process of self-examination and his personal temptations. His fame as a holy man spread and he attracted numerous followers. He died in about 618. For six centuries afterwards, Glendalough flourished.

The students were able to walk around the cemetery with beautiful Celtic crosses, look at St. Kevin’s Church, and take pictures of the famous Round Tower. This fine tower, built of mica-slate interspersed with granite is about 100 feet high, with a small entrance at the base. The conical roof was rebuilt in 1876 using the original stones. The tower originally had six timber floors, connected by ladders. The four stories above entrance level are each lit by a small window; while the top story has four windows facing the cardinal compass points. Round towers (Landmarks for approaching visitors) were built as bell towers, but also served on occasion as store houses and as places of refuge in times of attack.

Angie even told the students about the ancient legend of the large Celtic cross. If the students could hug the Celtic cross and make their fingers touch together, then they would receive a wish. Clare, from Chicago, IL, said she was very disappointed she didn’t have long arms. Margaret also couldn’t touch her fingers together, even though Angie even tried stretching them.

Counselor Casey said the fresh air felt delightful after being on a plane and a bus for a long period of time. The student couldn’t agree more. Evan was fascinated by the history and soaked everything in, taking his time meandering along the path.

The Irish Life Experience walked about a mile to the Upper Lake where many skipped rocks, waded in the water, and took jumping pictures. They then made their way back to the bus, where they would spend the next hour and a half driving to Waterford.

Once at Newtown Boarding School in Waterford, the Irish Life Experience were greeted by Eddie and James (Our honorary Irish students). The students were then able to get dinner, shower, and unpack their bags. Students then had a chance to check in their money and passports to the bank. Rest easy parents:).

The ILE Team finished the day with a few ice breakers. First was the attempt at the human knot. Many groups were successful and were able to communicate very well to untangle themselves. The next was, “I love everyone on the ILE, except people…” The object of this ice breaker is to have a student in the middle and to call out other students and try to get their seat, so they aren’t in the middle any more. For example, “I love everyone on the ILE, except people from Montana.” Then the three people from Montana would have to get up, change seats, and race for the last seat. It got to be pretty intense and Liam found himself in the middle quite a lot. The final ice breaker was a name game. Students had to think of an adjective that began with the first letter of their name. They then had to name all of the people ahead of them with their adjectives. We had Awesome Ally, Beautiful Ben, Judicious Julia, Magical Miles, Rebellious Rebecca… Kelton failed miserably at this, but he got a gold star for his effort. We blame it on his jet lag. By the time 9 PM rolled around, everyone was ready for bed.

When asked what her favorite part of the day was, Molly said she simply enjoyed meeting everyone. “I was nervous at first to come on the ILE, but after meeting everyone the first day, I think we are already a big family!” The ILE Team couldn’t agree more.