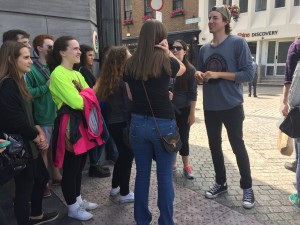 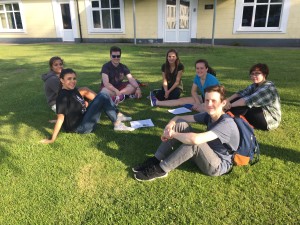 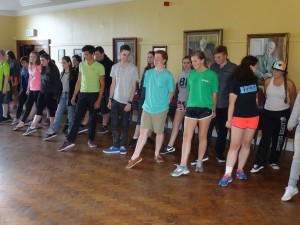 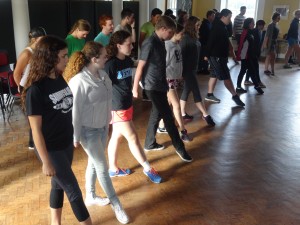 After a very long adrenaline filled day of traveling, getting students situated into the rooms, and making friends…, bedtime finally came. I think the students and counselors were ready to put our heads to the pillow. We had a few students that we could tell were homesick, but we encouraged them that a good night’s rest would fix that problem.

And what do you know…, all the kids were excited to see what day three had to offer. We started the day with an 8:30 AM breakfast and continued with the first day of classes.
The ILE Team was very impressed with all the students during their classes. This being Kent’s first summer working for the ILE, he decided to sit in on a few classes and learn with the students. “These students amazed me. I sat there observing all them take notes and ask questions. As I was sitting there I thought to myself, WOW! These kids are doing something not many high school students get to do during the summer. They are embracing a culture and becoming experienced travelers. It brought back a lot of memories from when I first traveled abroad,” Kent said.

The first class of the day was Irish Literature with Angie. She talked about the history of Irish Literature, including myths and legends, the Renaissance of Irish Literature, and told the students they would be studying W.B. Yeats, Seamus Heaney, Patrick Kavanagh, and Frank O’Connor. Today the students started with James Joyce and his very colorful life. Tomorrow the kids will be treated to a taste of Ulysses. During this class, Kent noticed that Evan was excited and also knew a lot about this topic. He was always raising his hand and correctly answering Angie’s questions. I think the students were all impressed with Evan’s knowledge.
The second class of the day was Irish/American History with Miles. The students got a brief overview about the class.

After the classes, Angie and Taryn went over all the behavioral rules and basic information about what the typical ILE day will be like and before you knew it…, lunch was here! The kids were served lunch by a group of Irish cooks. They are the sweetest ladies.

After lunch, Kate and Kent led the students on a walking tour through Waterford. The students were very excited to see their first Irish town. They quickly learned that the Irish drive on the opposite side of the road. The first to realize this was Liam. He said, “So…, instead of looking ‘left, right, left’ to cross the road…, we need to look ‘right, left, right! Right?” It was funny to see all the kids saying this to themselves as they would cross roads. A good first lesson when walking the streets of Ireland! Thanks Liam!

The first stop on the walking tour was Reginald’s Tower. This tower is one of the oldest buildings in Ireland. It is a very tall tower and made of brick. It was used to protect and warn the city of Waterford from close sailing Vikings. We also saw an old Viking ship, wall murals by John Thomas, the Catholic Church, and Christ Church Cathedral. Many students were excited to see the architecture of these old churches. Rebecca said, “Holy…, I have never seen a church like this in America. So much older than the ones in our country.” The churches were beautiful. They were both built by John Roberts, a famous Irish architect. Many of the students were very impressed with the architecture of Waterford.

During the tour, Kate and Kent gave the students historical facts, but also “fun facts.” During our stop at the Catholic Church, Kate told all the students that a member of the band One Direction, Liam Payne, was baptized at this church. “OMG!!! Are you kidding me? I am going to cry,” yelled Molly. “I love One Direction!” She was not the only student who was excited about this fact! Many of the ILE students started taking pictures of themselves at the church. They all got a kick out of Molly and her boy band love.

When the tour was over, the kids got free time to explore Waterford on their own. The ILE Team was very excited for the students to go and explore on their own. It is important for them to get that time. Kelton was going to take pictures of the streets and buildings of Waterford. Amelia and Ben went to check out the book store. This free time is a great way for them to see what they want on their own, which makes the ILE experience that much more enjoyable. While the students were out exploring, the staff was getting the rest of the day organized and ready for the evening activities.

When the students all checked in, they started their drama/dance classes. They were split into four drama teams that were coached by two staff members. Each team got to pick a historical Irish person to create a ten minutes rap/song/play about for the program. They are competing against each other in about two weeks. The winning team gets a secret adventure. Aiden said, “This is like Survivor…, winner gets a day trip. Bring it on.” The vibe of each group putting their ideas together was great. Kent said he can’t wait to see which team wins…, “which will be mine…, hopefully!”

After the creative juices were flowing, Casey took the kids over to the dance room to introduce them to Irish Dancing. Kent said he tried to join, but his feet just wouldn’t work that way. He sat back and watched the students and said it was hilarious! He was impressed with them by the end of the class! The Irish are not joking about their dancing. It’s definitely not easy.

The ILE ended the night with some friendly competition by the nearby track and soccer field and with the movie, Michael Collins. During bed check, a few of the students decided to taste test some the Irish chocolate and candies and were on a little of a sugar high. Needless to say, trying to put them to bed was a little more difficult.

Overall, the day was filled with joy and excitement. The ILE Team is excited to be experiencing this with an amazing group of kids. Each of them has found a way to make the ILE Team smile and laugh.