Breakfast today went as breakfasts usually do — featuring the hurried munching of cereal, grumbles about the other students staying here who had eaten all of the waffles, and students slowly rousing themselves from their stupors. Once sufficiently awake, it was time to get going.

We hopped on our bus to head into the heart of Dublin for our first real taste of the city. A recent addition to the cultural scene is the EPIC or the Irish Emigration Museum. This museum is almost entirely digital and the very first of its kind. Upon arrival, we were given museum “passports” that we could stamp at all twenty exhibitions. Some of these exhibits included topics like music, dance, sports and literature.

I had multiple students come up to me and comment that they could have spent at least four hours here and were disappointed that they only had a little under two. Each room was laid out in some unique fashion and furnished with screens, lights, painted patterns on the floors or sculptures. One of the rooms that fascinated the kids the most was the “whispering library”, where pages could be flipped on interactive screens and narrators would whisper pieces of literature written by Irish authors. It was quite atmospheric.

Anya said that her favorite part was the display on art and culture but wished that there was more to it. I think that might have been Angie’s favorite as well, as she discovered that her Orla Kiely handbag was actually on display in the museum! 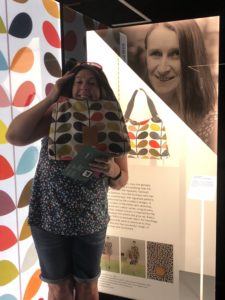 At the very end, there was a large display where students could type and send virtual postcards to friends and family, and I believe many students took advantage of this opportunity! Unfortunately, the separate exhibit on families and genealogy was closed. However, students will have an opportunity later in the week for a workshop with Miles and Taryn.

On our walk back to the bus for the next leg of our jaunt, we walked past the replica of the ship Jeanie Johnston, which was originally used to transport emigrants as the students learned in their history lessons. 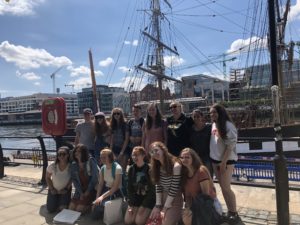 Safely ensconced on the bus once more, our next trip was for a brisk walk around the Howth peninsula. Howth is a beautiful fishing town on the coast outside of the Dublin and students took their lunches out on the grass in the sunshine, admiring the many dogs walking past. We walked about four plus (probably even more…) kilometres — just taking in the fresh sea breeze and the gorgeous views. As a group, we spent a few extra minutes within the town itself to take in the glorious weather before heading back into Dublin. 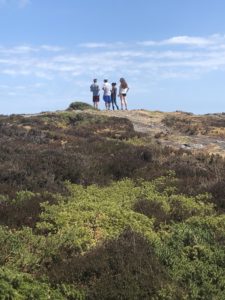 The group returned to Croke Park for the second time — but this time to visit the museum! The students watched a short montage of scenes about the preparation required for all GAA games, which I think really gave students an appreciation of the stadium. We got to access some of the top-most seats, along with a private box and a dressing room. All the while, students gossiped cheerfully with our guide about the recent performances of teams they’d heard of.

The students also tried their hand at a series of interactive games that were meant to be modeled after the physical requirements of GAA games to the glee of all involved. After we finished up, students caught the tail end of the televised rematch between Kilkenny and Galway with the eventual triumph of Galway.

We returned to King’s Hospital for dinner, drama and dance. Not much is new on that front — the food remains excellent, the kids remain engaged and enthusiastic. Everyone can’t wait to present their final performances.