The end is nigh. Time creeps closer. Our staff tries very hard to keep the fact that the trip is nearing end from the forefront of our students’ minds — and the best way to do that is to keep them busy!

We had yet another early start today and a few breakfasts were snuck onto the bus despite the watchful eye of Brian. Some dozed as we drove through the countryside to catch our ferry in Rossaveal, because today we’re heading out to the Aran Islands. More specifically, Inis Mor (or Inishmore).

The drive out to Rossaveal was cloudy and grey but still gorgeous. We were able to catch an earlier ferry than we had planned, but the boat ride over was choppy and took a bit longer than usual. The students pretty much split in half, with one group on the top out in the fresh air and the others down below. It grizzled rain but once we reached the island the sun peeked back out. 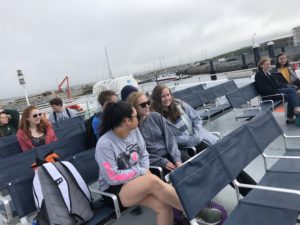 Since Inis Mor is only 8.7 miles long, the ILE staff traditionally rent bikes for the students to spend the day traversing the island independently. Of course, if students don’t feel up to a day of bike riding, we also hire a hop on/hop off bus run by local residents that takes students around the island.

The big things to see in Inis Mor are Dun Aonghasa (or Dun Aengus), the Aran sweater market, the Seven Churches and the heritage park at Dun Eochla. On the coast, there are beautiful — albeit cold — beaches and a few seal colonies. Scattered across the island are hundreds of miles of winding, ancient stone walls. The main exports from the island are cattle and crops like potatoes. Despite the massive deposits of exposed limestone that is technically an extension of the Burren, the island is well known for its biodiversity — especially its plantlife. 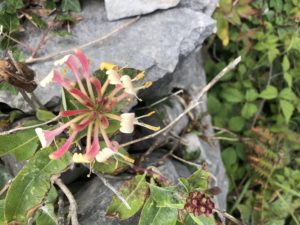 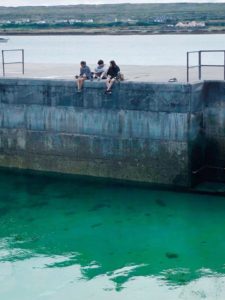 A few of our kids did brave the freezing water for a quick dip! Others bought souvenirs and jewelry from the local shops. The wee cafes on Inis Mor are amazing, so everyone had full bellies at some point in the day, but everyone was exhausted from biking, hiking, swimming and walking by the end. We re-grouped outside the bike rental at 4:30 to return our vehicles and catch the ferry. Sitting on the dock wall, students showed each other what they had bought and traded stories. 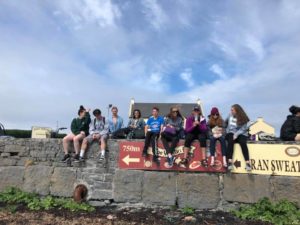 But the day was far from over. After our return to Galway, students cooked their own dinners and prepared to head off to see Mamma Mia! Here We Go Again with the staff! The majority of students had seen the first Mamma Mia!, but a few were a little lost. I heard a lot of whispered questions back and forth, like, “Why are all of these people singing?” and “What is he wearing?” Students enjoyed popcorn, small quarts of Ben & Jerry’s and other typical movie foods.

Not to give out too many spoilers, but the movie ends with a real tear jerker which prompted a lot of bawling on the bus ride home along with an impromptu karaoke party. Angie sang a few hits with the kids, using her glittery sandal as a microphone. 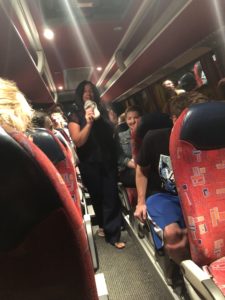 It was a bit of an emotional day over all, but a wonderful one. We are so lucky to have such an amazing group! Our solemn facades are beginning to crack as we reach the end of our journey. 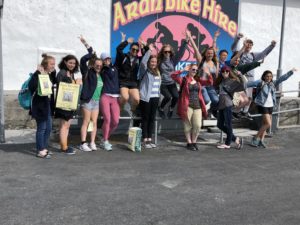