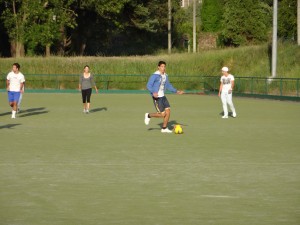 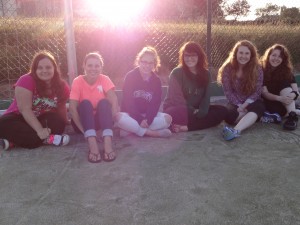 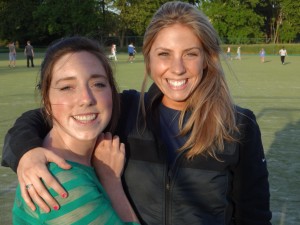 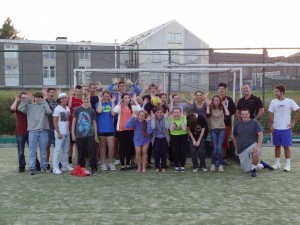 The ILE students woke up bright and early for their first class day. They showered, ate their breakfast of cereal, oatmeal, toast, and tea. Then they were split into two different classes of 15 students-Cuchulainn and Fionn mac Cumhaill (Famous Irish legends that Dan thought would be fun to hear the students pronounce.) for Gaelic, Irish American history, Irish history, Irish studies, and literature.

Today’s schedule was a little unique, as Dan had to drive back to Dublin to pick up poor Megan, who had missed the flight the previous night. So the students had two classes of Gaelic, two classes of literature, and one class of Irish studies.

At the same time as Cuchulainn’s Gaelic Class, Angie taught Fionn mac Cumhaill’s Class Irish literature. Angie shared the history of Irish literature with the ILE’ers and then read a story by Frank O’Connor to them. Kate L. loves everything Shakespeare, so she is very intrigued. “I find this class fascinating,” she said.

After 45 minutes, Angie and Scones switched classrooms and taught the different class the same subject.

They then had a quick break and went into Gaelic and Irish literature class for a second time.

Fionn mac Cumhaill’s Class learned about WB Yeats’ life from Angie and they read some of his works.

The last class of the day was Taryn’s Irish studies and they learned about the Geography and Geology of Ireland. Quite a few students decided to leave class a little early with Aubrey and go an Irish Mass. “I couldn’t believe how fast Mass was!,” said Amanda.

The students then had lunch, before they were allowed free time on their inaugural trek into Waterford. Dan and Scones gave the students a quick walking tour of the town, pointing out places of interest.

Katie R. said she loved scoping out the shops in Waterford and can’t wait to use her Penney’s Gift Card from her sister Felicia. She said, “Cool, wow, awesome, I’m excited.”

The rest of the afternoon was spent relaxing on Newtown Boarding School’s Campus-playing Head’s Up and doing impromptu Harlem Shakes. What a blast we had!

After dinner, the evening was occupied by drama with Aubrey and Miles and dance with Scones. In drama, students were split into four groups and assigned historical Irish figures. Their first assignment this week is to write a limerick on their Irish figure-AABBA rhythm. It will be interesting to hear them on Friday:). The winners will be posted on the blog.

In dance, Scones worked with the students on the basic 1, 2, 3’s and 7’s. Seth said he can’t wait to learn a few jigs and reels and bring them back to Montana.

It was a busy day and we decided to end it with a great game of soccer in which everyone participated-either playing or cheering. Dan said he saw some impeccable goal keeping from Devin (AKA Gru) and Mel. The ILE’ers had a blast and capped off the night with the Inbetweeners’ movie. What a great day!