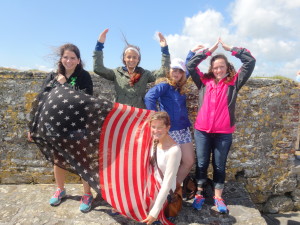 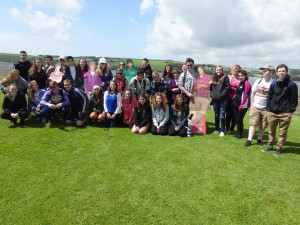 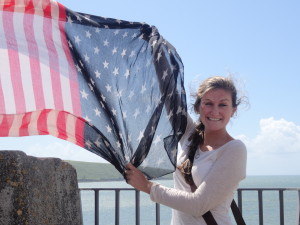 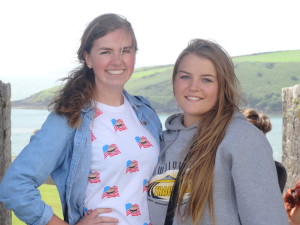 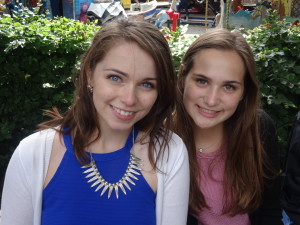 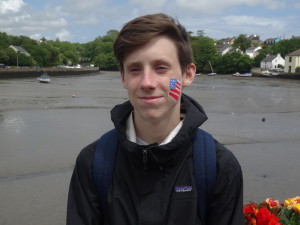 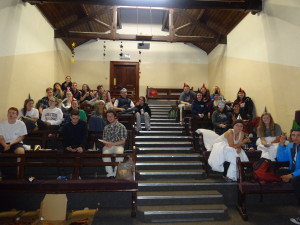 There was an early start to the day as we had to travel all the way to Kinsale, County Cork. Charles Fort was the first stop. Charles Fort is a star shaped fort located right on the coast across the bay from James Fort. Throughout the years, Charles Fort was used by different armies in different battles. It is famously known for having a 100% defeat record. It was only ever attacked once and it was from the land side. The occupants of Charles Fort at the time surrendered and marched out of the fort honorably.

It was one of the few years at Charles Fort that we actually had some sun…, at last! The tour guide may have been a little shocked that it was the ILE Staff interrupting her tour to have a photo shoot with One Direction (Or their cardboard counterparts, which is as close as any of us will get.), but the students were well used to it at this stage! Kelly Greene wore a lovely scarf-an American flag which turned out to be the perfect accessory for all of those Instagram pictures that needed to be taken, #FourthofJuly. The tour guide was quite impressive and provided an entertaining hour of detailed history of the fort.

Afterwards, the students were given an hour to explore the town of Kinsale. Kinsale is an extremely picturesque small town on the south coast of Cork. It is well known for its golf course but even more so for its seafood. Since the students had been given a packed lunch, they decided to spend their time exploring. Liam got a patriotic American flag painted on his face by Mary. Mike followed his lead and got a red white and blue star on his cheek.

We were lucky enough to be serenaded by a few students on the bus from Kinsale to Cork. It was not a long journey, but with some of the voices we had to listen to it definitely seemed it! There were some Whitney Houston impressions (Clare B.) that made up for some of the others though. It was the first time the students got the treat of seeing Angie dance to her FAVORITE band, One Direction. I think it was all a little too much for John though, as he took a nap in the hopes that Angie wouldn’t call on him next to dance for everybody.

Cork, being Ireland’s real capital, was a real treat for the students. It is Ireland’s largest county, best city, has the most welcoming and beautiful people and unfortunately casts the rest of the country in its shadow (Ahem…, Scones. Can you tell where she is from?). The students took very different approaches to exploring the city. Clare B, Johanna, and Molly got the chance to join some musicians for an impromptu dance session entertaining crowds out for dinner. Everybody was extremely impressed at the talent and the confidence the girls demonstrated.

Aiden took no time to discover Topman and brought a few unsuspecting students in and ruined American shopping for them in the future. They put their well-earned dollar bills to good use. There’s no doubt the fashion shows we’ll have for the duration of ILE would be fit for Milan. Let’s just hope there’s no issue with fitting Milan in a suitcase at the end of July.

The disappointment of leaving Cork was a little bit too much for some students who didn’t feel too well on the bus journey back to Waterford. The only thing we could use to bribe them back on to the bus was the promise of some celebratory pizza and candy for the 4th of July. Once the theatre was decorated in some appropriate blue, white, and red stars Evan wasted no time in rushing down to be the first to grab some pizza. It took a few staff members to convince him that other students needed to get a slice as well, but eventually the candy was enough of a temptation to pull him away from the pizza line. After giving all of the students a lovely sugar rush with chocolate, Coke, Fanta, and popcorn-they all settled in with their pajamas on and their duvets in hand to watch The Breakfast Club. …A real American classic for the day that was in it.