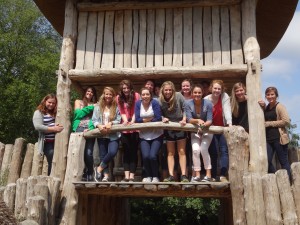 Today was a spectacular day and a lesson in Irish history, as we went to Wexford to visit the Irish National Heritage Park in Ferrycarrig. It is a place where Ireland’s heritage comes alive with sights and sounds that shaped the country and helped to shape the world.

More than any other country in Europe, Ireland is dotted with material reminders of its past. However, few people apart from specialists can visualize what these remains were like in their original state. This is the purpose of the Irish National Heritage Park-to show how people lived, worshipped, and buried their dead-from the coming of man to this island until the arrival of the Normans in the 12th Century.

The park we toured is an authentic recreation of Ireland’s heritage. Homesteads, places of ritual, burial modes and long forgotten remains enlightened us all on the early people of Ireland. Its history is presented in a unique and magical way as the history of Irish life of 9,000 years unfolded before us-from Stone Age, to Christianity conversion, to Viking invasion.

Close to the end of our journey through history, we stopped to learn a way the early Irish fed great crowds of people. They had an in ground pit of water that is heated by throwing rocks into it from the fire until it starts to boil. This is called a Fulacht Fiadhin. To boil the meat (Typically pig.), it is wrapped in straw, and this was just the surprise that was waiting for us around the corner. Our tour guide-dressed in a full Bronze Age costume-had a current slab of ham cooking for us all to feast upon. He pulled if from the boiling pit with a pitch fork and cut if free from the straw. He then sliced it all up and we gathered around for a sample. It was quite delicious and several went back for seconds. Yumzers! Caroline even said it was some of the best food she has had yet!

Afterwards, on the way back to Newtown we had a quick stop in New Ross in County Wexford. This is the town where John F. Kennedy made his memorable speech to the Irish people on June 27th, 1963. This year marked the 50th anniversary of his visit and the town was bustling with excitement for the 4th of July, while American flags lined the town’s streets.

The ILE ate their packed lunch, walked along the quay to see the statue of JFK memorializing his trip to Ireland, and took pictures of the Emigrant Flame. On June 18th, a torch was lit at the graveside of President Kennedy in Arlington National Cemetery and made the journey to New Ross in County Wexford. Symbolizing the immigration route taken by JFK’s great grandfather through Boston, Liverpool, and eventually New Ross for the ignition on June 22nd by his sister Jean Kennedy Smith (US Ambassador to Ireland in the 1990’s.).

The ILE eventually made their way back to Newtown Boarding School where we had some American comfort food of hamburgers and hotdogs to celebrate our holiday. The ILE Team then had some fun activities planned for the students-the Counselor Olympics. Complete with a human tic tac toe game, (Six chairs are set up in a grid and the students are numbered in two teams. When a number is randomly called, the student with that number from each team has to dash to a seat and sit while making either an X or and O above their head. Needless to say, it got a little ruthless.), an egg and spoon, leap frog, Life Saver and toothpick, sack, and wheel barrow race. Jimmy and Gru proved to have excellent leap frog skills and formed quite the unstoppable team. The kids had great fun.

Even though there weren’t any fireworks or sparklers, we had an ILE party to cap off the evening. Dominos, pop, loads of candy, and the movie-Pitch Perfect. Peanut Paddy said he loved the delicious pizza and thought it was an epic 4th of July celebration had by all.

By 11:30 PM, all of the students were exhausted from the busy day and were sound asleep in their beds by midnight.