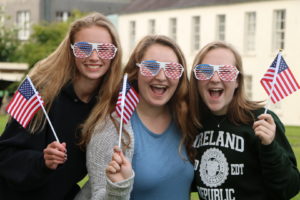 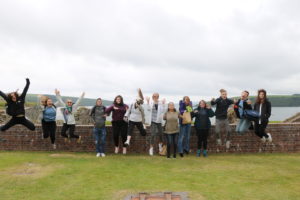 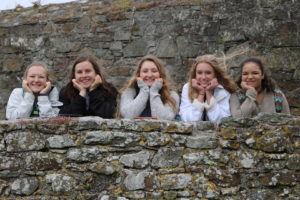 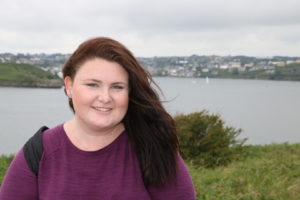 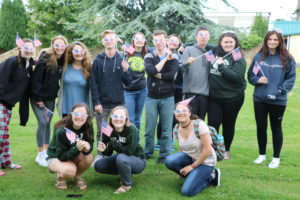 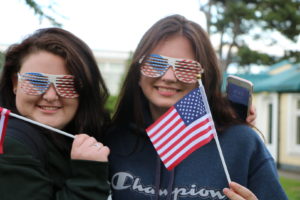 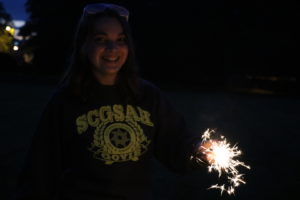 Early start today because the bus was leaving at 8:30 AM, but it seems to be surprisingly easy for everybody to rise when it’s not a class day. It being the 4th of July, the fabulous kitchen staff put on a special spread for breakfast for their favorite Americans. It was time to give celebrating Ireland a break in favor of America for the next 12 hours.

Today’s trip was to Kinsale to see Charles Fort built in the 1600’s and used to protect England from invaders using Ireland as a backdoor entrance. The journey to Kinsale was just long enough to allow the sleepy heads some well needed nap time. Unfortunately we realized within the first five minutes of tour guide questions going unanswered that there hadn’t been enough nap time! Finan, our guide was well able to fill in the tired silence’s with detailed facts about the architecture of the fort, the logic behind the star shape, the history of how the soldiers and their families lived inside the fort as well as the rather impressive fact of Charles Fort having a 100% failure rate. This despite the fact it is widely recognized for how well thought out the architecture and construction was. Finan finished the tour with a dramatic tale of The White Lady, the old Governor’s daughter that jumped to her death due to heartbreak a few hundred years ago but mysteriously still hasn’t left Charles Fort and makes regular appearances in her old bedroom…, a bit too spooky for some of our students but the perfect opportunity provided for the staff to scare the Kane twins a little more.

The students all had some time to take a few pictures of the fort and the lovely views of Kinsale Bay. Bridget commented that it was beautiful in every way and it really was!

We left Charles fort to spend some time in Kinsale village for lunch and to give everybody a chance to explore. John Paul spent his time window shopping through the small windy streets along the multi-colored unique shops. Abby, Bridget, Brigid, and Rose all found a small fairy tale store, completely colorful and full of pretty and magical little gifts. They were in awe of how cute everything was and funnily enough the shop owners were in awe of how cute Abby was, even asked if she’d be the shop mascot for the summer! Unfortunately the ILE wasn’t willing to leave her behind so don’t worry Mr. and Mrs. Howles she will be returning with us after-all.

On the way back to the bus Taryn stopped to get all the students a ’99 ice cream, the Staff feel it’s part of their job to prove Ireland has some of the best food in the world, be it scones made by Scones, Kinsale ’99’s or Cadbury crunchies-we’re pretty sure all of the students know Irish dinners can’t be beaten already.

After Kinsale, #ILE17 went to Cork City, the real capital of Ireland and possibly the best place on earth, ***The writer of this blog is in no way biased, this is an objective fact with absolutely no subjectivity allowed for.***

After all of our pushing Irish food Aubrey and Tippy needed a little home comfort and opted for some fried chicken which was apparently “goo-oo-ood,” but not spicy enough. After a few hundred years of living off of potatoes, having any bit of spice is adventurous enough for us Irish I’m afraid.

Students got to explore the famous English Market in Cork, a mainly outdoor market with the largest range of mouth watering goodies…, mostly. They have handmade Irish chocolates and cute little cupcakes, there’s every type of olive you could ever imagine, mouth watering pies and then the next stall may just have a full cow tongue staring back at you just in case you want to cook up some real traditional dishes.
John Paul was pretty delighted with the €2 adapter he managed to find in the market, sometimes not coming prepared works out in your favor. There was just enough time for a few souvenirs to be purchased in some of the shops throughout Cork, but we can’t go into detail on any of those in case we give away a few surprises.

Home time finally with a few tired heads on the bus, but when we arrived back in Waterford and the students remembered we were getting pizza to celebrate Independence Day, they perked up fairly lively. None more so than Hannah though, who said she’s always wanted pizza on her birthday, but with 7/4 being such a BBQ day it never worked out for her. Safe to say she wasn’t too homesick on her birthday celebrating with some of her newest best friends and her favorite food. The birthday cake, balloons and watching Ferris Bueller’s Day Off, (What a classic!) were just the icing on the chocolate cake. Pun intended.

The students also had an opportunity to light sparklers (All the way from America-thanks to Casey), wear patriotic glasses, and sing the Star Spangled Banner.

With all the sugar and excitement bed time may have been pushed out ever so slightly, never an issue though as it’s usually Taryn that keeps everybody up with her chats, jokes, and singsongs. Back to celebrating Ireland for the next 20 days. America will have to wait.