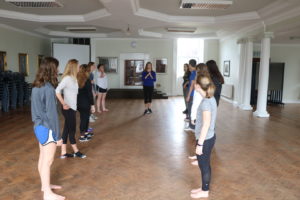 Following breakfast in Newtown, it was straight into morning class. The students had a quick chat about the Leinster Hurling Final and then it was back into neolithic Ireland and its burial traditions. 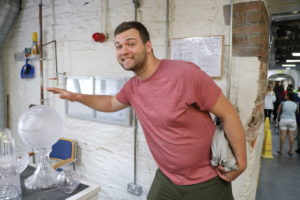 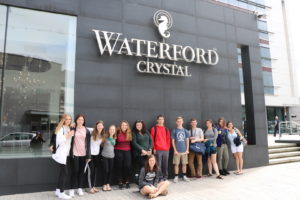 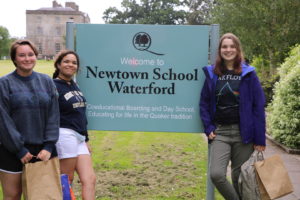 After Irish history it was straight into Irish-American history. In this introductory lesson the students had a group task based around their preconceived ideas on Irish-American history. They brainstormed some keywords and each group did a brief presentation on their discussions. It was interesting to note that many of the students were unaware of the Ulster-Scotch influence in America from the early 18th Century. They also discussed the historical background of this as well as the political, social, and cultural context.

After a break it was back to Irish dancing with Casey. Interesting moves and techniques were on display, but the ILE students are quick learners so we’re thinking the “Lord of the Dance” might be the next step. No pun intended. After hitting over 10,000 steps on the FitBits, they felt it was time for some well deserved carbs. …Off to lunch.

Fully energized, it was off to Waterford Crystal for the factory and shop tour. While waiting for the tour, we were treated to some not so magic tricks. We had a good laugh when we found out that Bridget can clap her thighs together, Rose can do the worm, and Tippy can touch her tongue to her nose.

Waterford is world famous for its crystal and the students were not disappointed with this quality Irish brand. Having been given the historical and family background of the business, it was out onto the factory floor where we saw at first hand the master craftsmen work with the molten glass, blowing, and sculpting to create their masterpiece. Thankfully there was no crystal harmed or broken in the making of this tour and it was back to Newtown for some Celtic Card Making with Casey. Card making involved listening to the soft tones of Ed Sheeran and the class was interestingly described as “relaxing!”

After a “spag bol” Irish style, it was back to last class of the day with Scones, Gaelic. The origins of the language were discussed. The final part of the lesson was a documentary demonstrating how the Irish language is spoken and its perception outside of Ireland.

If this day wasn’t action packed enough we finished off with a scavenger hunt around Waterford City. The hunt involved running around looking for random things like a postcard with a sheep on it to the smallest car you could find in Waterford City!

Miley and Taryn decided that they would give the students a fright and scare them after each team returned to campus. The ILE Staff has some amazing slo-mo footage of great reactions. Miley and Taryn are scared that the students might retaliate;). Once Casey had judged and found the winning team, the group of Abby, Brigid, Bridget, Garret, and Lauren bagged themselves some beautiful Waterford flags and second place had to settle for a 2 pound gummy banana. Poor Aubrey, Hannah, Peirce, and Rose did not find it a-peeling. Pun intended. It’s going to be a big trip to Cork and Kinsale tomorrow, so it was time for some much needed shut eye.