Our meandering travels took us all across County Clare today. To make sure we had sufficient time everywhere we went, it was a bit of an early start. The day began with a bit of a solemn start as we went to Corcomroe Abbey on the Burren. Corcomroe is a 13th Century Cistercian monastery where families are still interred to this day. A few days ago, we had student pick up stones to put in their pockets and today the students placed them in the Abbey in remembrance of anyone they chose. It was a quiet affair, but it placed the students in a thoughtful mindset for the rest of the day.

We traveled deeper into the Burren for our next few stops. The Burren is a very distinctive landscape of exposed rock, mostly limestone. Many plant species grow in the nooks between exposed plates, including gentians and a few types of orchids. Underneath the surface of the Burren, there are no doubt huge systems of undiscovered caves and caverns but instead of intrepidly spelunking, we played it safe and just went to Aillwee Cave instead. 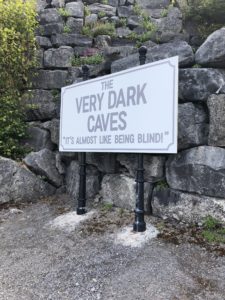 Aillwee is one of the oldest caves in Ireland but was only opened to the public in the late 1970s, despite being discovered by a farmer chasing his dog in the 40s. According to our guide, Aillwee was used as an ancient bear den until the brown bear became extinct in Ireland. Indeed, there are still some bones on display from ten thousand and three thousand year old skeletons, and the nesting depressions in the earth from the bears still remain to this day. We only got to see a small section of the much larger system as unfortunately it is prone to flooding in some parts.

After the tour was over, we didn’t linger long in the caves — no remakes of The Descent franchise here! — and we headed right next door to the Birds of Prey Centre. We were booked in to see a flying exhibition which was an incredible experience.

Our handler Sean flew a Bateleur eagle, a Barn owl and a falcon for us. Anna got to hold the Bateleur and Nancy got to hold the Barn Owl! All three birds flew around the audience prompted by treats and lures in the hands of Sean. The eagle in particular flew right past Angie several times, prompting laughs from the students. After the show, we toured around the enclosed aeries of more raptors like Great Horned owls. 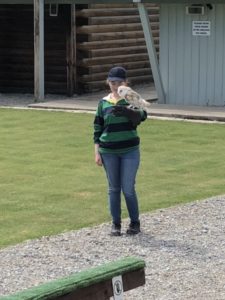 The next stop on our outing in Clare was the Poulnabrone dolmen or portal tomb. While there are over a hundred other tombs on the Burren alone, this is one of the most famous by dint of having been excavated. At least thirty-three distinct individuals were uncovered along with various personal items. We spent some time clambering over the rocks and looking at the wildflowers.

For lunch and ice cream (yes, I know, yet more ice cream!), we stopped at Lahinch beach for an hour. No one went into the water this time but students walked up and down the promenade and climbed around the rocks. The cliffs of Moher are just visible from Lahinch, so as we drove up the anticipation mounted. 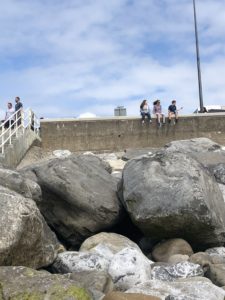 Before heading up the cliffs, we stopped at St. Brigid’s Well for the students to see what folklore extolls as healing waters. Fortunately, no healing was required (or will be for the rest of the trip), so we merrily headed up the cliffs. The weather continued to hold out and the sun warmed the usually chilly area.

The views from every angle of Moher are completely spectacular. We had an hour to walk up and down the paved paths to O’Brien’s Tower. Of course, no blog entry would be complete without the usual list of films and the cliffs of Moher have played host to the Cliffs of Insanity from The Princess Bride and the location of a horcrux in The Half-Blood Prince. 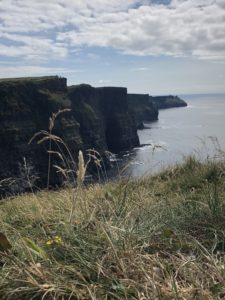 Thank goodness no one tried to recreate the iconic scene where Westley scales the rocks in search of Buttercup. That is all we ask in life.

We headed home in the evening thoroughly tired out. Rather than brave the stove, a few students ordered out for pizza and even the counselors found a take-away place. Tomorrow we visit one of my absolute favorite places on earth and we all can’t wait to show the students what we have in store for them!