Our day felt like a perfect and exact transition from the last. We ventured out from King’s Hospital to begin our day at the General Post Office or GPO. This iconic building has a central vantage point of the city and was therefore the chosen headquarters for the 1916 Uprising, where Plunkett and Pearse and Connelly planned.

The tour did not begin when we set foot in the building — no, it started at the very pillars supporting the architrave and frieze. Those pillars still bear witness to the bullets that tore through the streets. It was a very grave day from the first. All of our students took in the information presented with respect and dignity. The museum of the GPO is contained within the basement, while the upstairs continues to function as a working post office.

During the tour, we watched a brief interpretive film that condensed the actions of that fateful Sunday. The students then had free time to wander the museum and the interactive exhibits. There were several complimentary videos, antique clothing and photographs on display as well.

After visiting where the Uprising began, we saw where it ended for a few. Kilmainham Gaol had fallen into disrepair after the Civil War but has been gradually restored. Our guide began us in the chapel where Grace Giffords and Joseph Plunkett married. We saw several cells in the oldest section, then moved into the wide, Panopticon-style atrium. Grace Giffords was later imprisoned in Kilmainham like her husband, and painted a moving image of the Virgin and Christ inside her cell.

The Gaol has an additional wing that has been converted into a museum space full of exhibitions concerning the Gaol, famous people imprisoned and a seasonal exhibit on Nelson Mandela. The Mandela exhibit took a complete floor and while there was an especial focus on his time at Robben Island, it also tracked his life and the relationship between Ireland and South Africa. Personally, I was intrigued by a small exhibit on Dorothy Macardle, who went on to become a horror writer.

Despite the serious tenor of the day, our students maintained their sense of humor. I hope the love they brought into Kilmainham could be felt by any who linger on in this vale of tears. 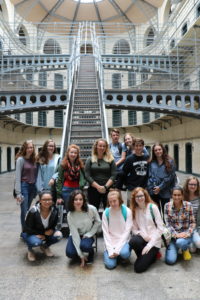 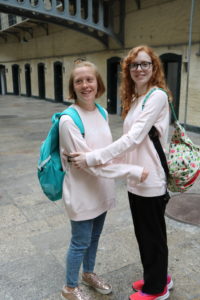 Their spirits were also raised after the return to King’s and the promise of free time. Actually, Emily ran into her mom at Liffey Valley! They both knew they were in Dublin but they were so surprised!

To end our last day in Dublin, we finished with the parallel of our talent show, which is our final drama presentation night! Each of the three groups did an amazing job with the time they had to do their project. However, it was Casey’s group of Clare, Ethyn, Nancy, Anya and Kennedy who took home the bacon with dual wins for both the music video and presentation.

For the music video, they recreated “Molly Malone” with a human wheelbarrow. And for their presentation, they took a very unique twist on the life of Patrick Pearse featuring Ethyn as a…modified Pearse. Congratulations!! They earned themselves ice creams and fun prizes that are yet to be distributed! 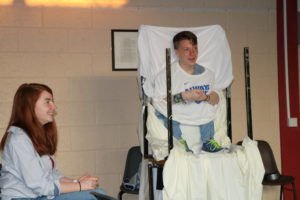 The rest of the night was spent packing and preparing for an early morning ride to Killarney!