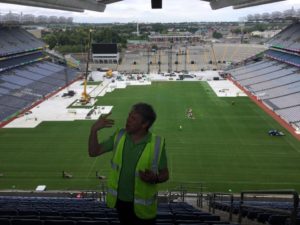 Today we finally had a chance to sleep in and rest our bones after a long night of dancing with the Italian and Spanish students at the King’s Hospital disco. Garrett slept for the full 12 hours, while others opted to wake up and go to mass before catching a delicious and nutritious breakfast of fruit and cereal. Most everyone was well rested and feeling fresh for the easy day ahead.

All the students were on time for the bus, and then we were on our way to tour Croke Park before 1:00 PM. On the way to the third biggest stadium in Europe our self-proclaimed “ginger enthusiast”, Tippy, pointed out every single redheaded person she saw and may have fallen in love with serval handsome young men during the 25 minute bus ride. We also had a quick would-you-rather that involved giving up either bread or cheese for the rest of our lives. The group was nearly split down the middle with each side supporting their decisions to give up arguable the best foods ever. Anna M. had a convincing argument for giving up cheese based on a burger scenario…, she rephrased the question as “would you rather have a hamburger with no cheese or a cheeseburger with no bun?” After this deep philosophical debate, we all realized that pizza would never be the same and that we were feeling peckish.

We arrived at Croke Park, and faced the seemingly never-ending battle of fighting over ham sandwiches or swapping with a friend to get both ham and cheese. Abby and Brigid took a page out of Shona’s Irish cookbook and put their potato chips in the sandwiches for extra filling and a little crunch. Our tour guide, Aran, filled us in about the Gaelic Athletic Association. We watched a ten minute film that gave a spot on representation of what match days look like in Croke Park during the all-Ireland finals for both men’s and women’s football and hurling. He then showed us around the Opel sponsor’s box and explained that a box like the one we were in would cost about 163,000 Euros and would give them opportunities to bring clients to games for three years. Aran told us that people who actually show up to watch the games would much prefer to sit in the stands because the atmosphere is so much more electric and intimate there than behind the glass walls in the boxes.

After the box, he took us to a locker room and elaborated on the fact that each dressing room is exactly the same dimension, temperature, and layout so that neither team has an advantage. We got a peek at every county’s jerseys, and even got to see the shirts from the New York and the London teams. Our students got to see the warm up room adjacent to the locker room where athletes would do most of their stretching and loosening up before taking the pitch for what could be the biggest game of their lives. Before we knew it, we were running down the tunnel that the best GAA players in Ireland would take before sprinting onto the field surrounded by up to 82,500 roaring fans.

When we got to the pitch, it looked like a construction site. Apparently, Coldplay had played a show the night before and there were loads of people working to break down the stage, pick up confetti, and rip up the plastic floor that was covering the perfectly manicured grass. This concert was one of only three that would take place in the stadium this year, and it takes the workers three days to set up and tear down. It’s quite the feat considering that the GAA still has scheduled matches surrounding the sold-out concerts. 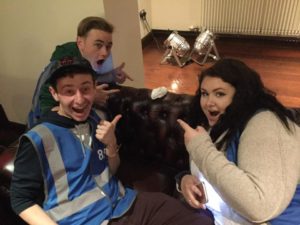 Aran took us up to the highest seats in the stands and Angie nearly had a panic attack. It’s not for the faint of heart or people with fears of heights, and it’s enough to make even the bravest of students uneasy. We got a history lesson about the reasons behind the names of each stands and a day that remains in the minds and hearts of the Irish people. On Bloody Sunday, English soldiers entered Croke Park in search of contraband items, namely guns, that were used during the Irish War of Independence. They ended up firing into the crowd that showed up to watch a football match between Dublin and Tipperary and killed 13 people, one of whom was competing in the games.

Our last stop of the tour was the lounge in which the players will hang out and drink a pint after their games. It looked a little different than it usually would because Coldplay used the lounge as their green room and it looked like they may have been joined by a few dozen friends. Peirce took pictures of the table that the musicians could’ve eaten at and debated finishing up their left-over fries while Tippy was zooming in on a dirty tissue. When the students realized that they were sitting on a couch that was brought in specifically for the band, they forgot that the Gaelic Athletic Associated even existed, but it was a treat to see them so excited.

After TK took his fair share of pictures, we took the escalator to the museum on the next level. Casey managed to score an impressive 121 steps on the high knee game, but was blown out of the water by Abby who managed to high step into the record books with 195. Aubrey and Anna M. took turns trying to kick a Gaelic football into a series of small holes in a wall, while Hannah and Tippy cheated in a hand pass game. When everybody was way too sweaty for the anticipated amount of effort, we decided it was time to head back to King’s Hospital.

Dinner was absolutely gorgeous. The boneless chicken breasts were perfectly fried with just the right amount of batter served up with sides of green beans and potatoes and gravy. Nom. Nom. Nom. Thirty short minutes after absolutely stuffing our faces we were playing a highly competitive game of kickball using paper weighed down with rocks as makeshift bases. Miles’s Team, AKA Team USA, was made up of Abby, Aubrey, Garrett, Hannah, Rose, and Tippy. Everyone else was on Taryn’s team, AKA Team Ireland. At the end of the day, the score doesn’t really matter…, but Team USA won by a landslide.

Both teams met up in our own little players’ lounge next to the office to celebrate Anna M.’s 18th birthday. The candles were lit on top of a small chocolate cake and her ILE Family shouted the song at the top of their lungs before devouring the pastry. Because it was her birthday, we let Anna choose the movie for the night which ended up being Anchorman, a hilarious film starring Will Ferrell. Anna said some of the highlights were playing apples to apples and giving the boys a drawing of themselves that she made. “It was like my birthday present to me to give it to them.”

As another eventful day drew to a close, Scones went to check on the girls to make sure that everybody was in their respective rooms with the lights out. She channeled her inner-demon and sang them lullabies in “literally the creepiest voice I’ve ever heard” according to Brigid. Lauren missed the whole thing because she was sleep walking, around campus with no shoes on.