The morning of our move to Galway has dawned. Students combatted the chaos of packing with hearty breakfasts of toast and cereal, and packed their lunches before cleaning up their apartments. On top of doing their own shopping, cooking and budgeting our students are responsible for keeping their apartments nice and tidy. They absolutely succeeded in their efforts and we hit the road on the early side.

The day was absolutely gorgeous with dry heat, lots of sun and few clouds. Our plan for the day was to head down to Bunratty to spend the afternoon while Angie and Taryn got the apartments in Galway sorted out, and then meet them for an introduction to Galway. And more grocery shopping — students are starting to run out of jam for their PB&Js

But before we could reach Bunratty, Brian Farrell (our beloved bus driver) decided it was high time for a little cinematic education. We were treated to a bus ride filled with episodes from the cultural landmark and Irish sitcom Father Ted. We watched the episode where Father Ted goes to Aillwee Cave and the timing could not have been more perfect as that’s where we’ll be tomorrow!

After a few hours of watching priestly shenanigans, we arrived at Bunratty! We began with a tour of the castle. Inside the castle there are incredible examples of 15th Century craftsmanship including a Belgian armoire that is exquisitely carved. The students took lots of pictures of the restored tapestries and the Irish elk antlers hanging in the great hall. After the guided tour, the students wandered around the towers to get incredible views of the valleys below us. 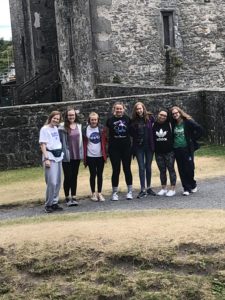 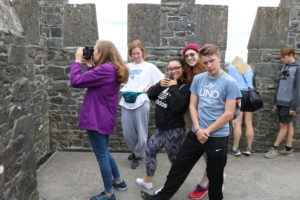 Over the years, a folk park has developed around the environs of Bunratty. After spending quality time in the castle, the students then dispersed around the grounds. Some of the attractions include a 19th Century village street, a fairy garden and a walled Victorian garden. Scattered throughout are small livestock pens containing goats, turkeys, donkeys and more. The baby goat was no doubt the most popular among these. 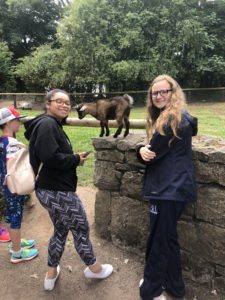 After visiting the gift shop, students piled back onto the bus for the remaining leg of our journey into Galway. 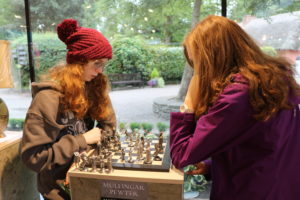 The apartments in Galway are part of the Gort na Coiribe Student Village and are approximately the same size as the Gleneagle apartments. From the village, it’s a short walk to Dunnes for groceries and about a fifteen minute walk into the heart of Galway itself.

Students prepared dinners for themselves or ate in town and had free time until the curfew at 10. Everyone drifted off to sleep to prepare for another fun filled day tomorrow in Connemara.