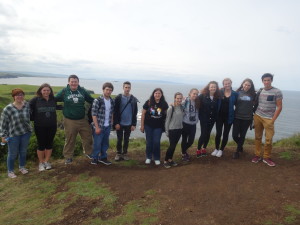 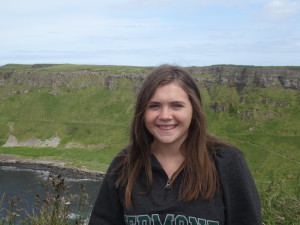 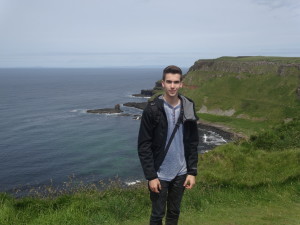 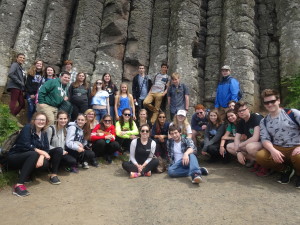 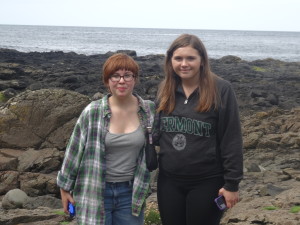 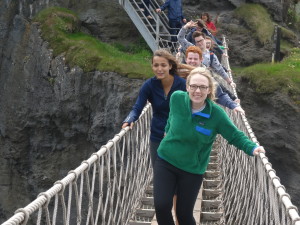 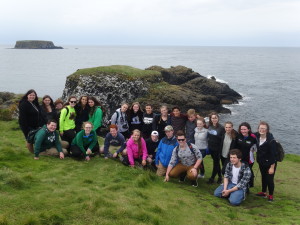 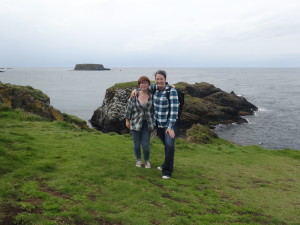 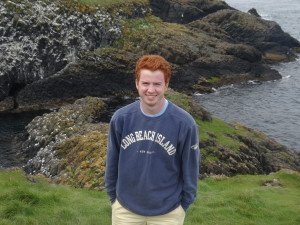 We had an early start this morning-6:30 AM, but the King’s Hospital Kitchen Staff pulled out all the stops with Cheerio’s, Rice Crispies, and toast for breakfast. We all enjoyed the meal in silence as the students were absolutely exhausted, before hopping on the bus for the long journey to, according to Angie, God’s Country…, the North of Ireland.

First stop when we got over the border was the new Titanic Exhibition in the Belfast docks. This center was only opened three years ago to commemorate the 100th Anniversary of the ship’s maiden voyage. The exhibition exceeded all expectations. The highlight of the trip was probably a cool cable car style ride down into a recreation of the construction of the hull of the ship. There were loads more great features inside and fortunately there was plenty of Kleenex on standby for those students who were devastated by the unexpected sad ending. Surprisingly a lot of our students didn’t know that Leonardo di Caprio died.

As Belfast’s finest ambassador Angie Mervyn explained about the Titanic, “She was fine when she left here.” At the end of the tour, the kids had a photo taken outside at the Titanic sign and the craic was great. Some of the kids bought souvenirs and Eddie said the tour was “amazing, cool, wow, and awesome.”

Meanwhile Alice had a disaster with her phone and Angie took her to the Apple store in Belfast to get her iPhone fixed. We ended up ordering another and Alice treated herself to a cool new Ipod Touch so that she could be in touch with home and her brother Patrick, who is currently studying in Galway and will be meeting us on Sunday in Croke Park. Going with Alice was a disaster for Angie, as she ended up spending a fortune on hair products in the shop next to the Apple stire and she is currently having a credit card crisis…

So on to the bus again and as we drove out of Belfast, Angie’s home town, she was kind enough to point out her summer house to us as we travelled north to the Causeway Coast. The bus passed through Bushmills, County Antrim, home of the oldest (Legal.) distillery in the world, but time constraints meant we couldn’t stop to sample the fare. Unfortunately, we had similar time constraints when we passed the Jameson Distillery in Middleton last week. I guess everyone will just have to come back to Ireland in a few years time!

As Angie explained to the kids, there was great rivalry between the two giants, with Fionn McCool knowing that Benandonner had the advantage in terms of height and strength. As Fionn was pottering at his house he heard a very loud BOOM BOOM BOOM, the earth began to shake and waves began to roll and crash against the coast. When he looked towards the Causeway he saw the imposing figure of Benandonner approaching, brandishing a weapon and roaring like there was no tomorrow. Fionn McCool, terrified for the first time in his life, ran into his house shouting for his wife to get the baby blanket and soother ready. A few minutes later there was a loud BANG BANG BANG on the door. Fionn McCool’s wife answered the door and greeted Benandonner with a finger on her lip, telling him, “Shhh or you’ll wake the baby!” Benandonner ran in to the house and peered in to the baby’s cot only to see the biggest baby he had ever set eyes on lying in the crib with a bonnet on and soother in his mouth.
Benandonner said to himself, “Holy sh**, if that’s the size of the baby, what in the hell size is the father?” And with that he ran back to Scotland, tearing up the Causeway as he went. The students were smart enough to discount the childish rumors about the Causeway being made up by hexagonal basalt rocks which were formed when molten lava cooled rapidly towards the end of the last Ice Age.

Everyone had great fun clambering all over the Causeway, the Giant’s Boot, and the Giant’s Organ. Kelton said it was amazing and took a lot of photos. Kelly said she found it so peaceful and beautiful and that it was something really special.

Then it was time to move on to Carrick-a-Rede Rope Bridge. This is a tiny little bridge made from rope and planks of wood which were thrown out to a tiny offshore island by salmon fishermen. Now it features in most of the ads and brochures for Tourism Ireland, and with good reason. The ILE group traipsed down to the bridge and Angie, Kelly, and Laura Laura-despite best efforts and good intentions and offers of help from Robert, just couldn’t cross it-height fright is an awful thing!!

We all hopped back on the bus and it was off to Ballycastle, a lovely little seaside town, for dinner. Ballycastle is really nice to visit even when it feels like the middle of winter on a summer’s day, because by this time the rain had started to bucket down!

The kids had dinner in Ballycastle-healthy nutritious food such as pizza, ice cream, and garlic chips! Very Irish altogether…

A long bus ride home beckoned. We were so tired by the time we got home that some of the girls were fast asleep before bed check whilst others dipped their toes in to the disco in Kings Hospital.

And so ended another COOL, WOW, AWESOME day, with the kids going to sleep with good thoughts, yellow auras and the promise of another great day tomorrow as the cock crows at the break of dawn.