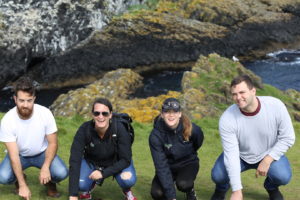 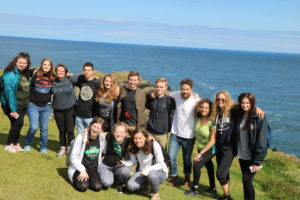 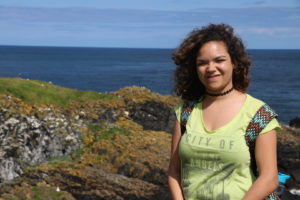 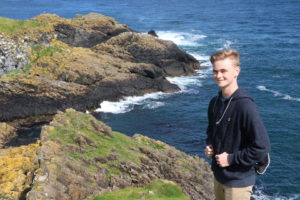 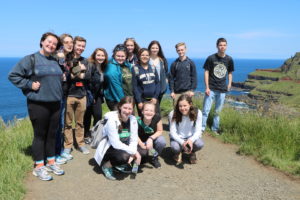 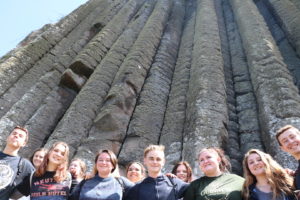 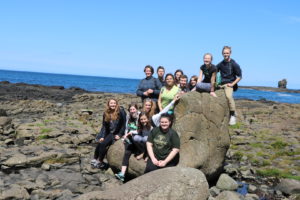 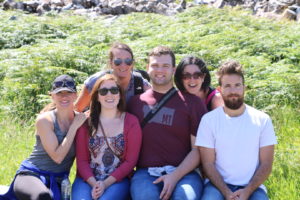 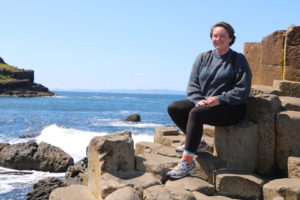 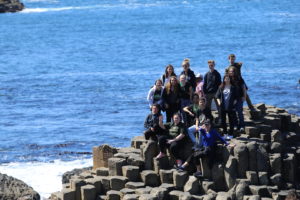 This was the beginning of the day when we all had to roll ourselves out of bed at 6.15 this morning to head to the North of Ireland. Strange noises and varying sounds which were barely recognizable as English were made by staff and students alike as we made our way to breakfast and carried on sleeping whilst shoving food and coffee down our throats.

At 7:00 AM we boarded the bus and set off for one of the best days of the trip-to God’s Country as Angie said (She’s from Belfast so knows what she’s talking about!). The sun was shining and it promised to be a good day.

We passed through Belfast and made our way to the Antrim Coast for our first stop at Carrick-a-Rede Island. Strung 85 feet above the sea, Carrick-a-Rede Rope Bridge connects the mainland to the tiny island which is a salmon fishery. All of that is well and good, but the main function of the Rope Bridge is to scare the bejaysus out of tourists while it sways, leaps, and bucks under you as you cross it. Angie was telling the kids that this is her 17th time at the Rope Bridge and she still hasn’t crossed it. Hannah held her hand and said soothing words and in Angie’s 17 years of visiting, this year was destined to be different. Yeah in her dreams! She looked at the Bridge moving in the wind and made a runner in the opposite direction back towards the bus! Hannah said afterwards with full Irish wit “thank God I didn’t fall!”

When the kids came back, they cheered Angie up when Anna M. Aubrey, and Tippy gave her a drawing, which now takes pride of place on the staff room wall, and Brigid gave her a beautiful flower she picked on the Island.

Next stop was the Giant’s Causeway, which is a UNESCO Heritage site right on this fantastic little island of ours.

Now the story of the Giant’s Causeway is an interesting one. Long, long ago there lived an Irish giant called Fionn McCool, who was a very famous warrior. Meanwhile in Scotland, there lived a giant called Ben An Donner and, although they had never met, there was great competition between the two. The story goes that Fionn McCool built the Causeway between Ireland and Scotland so he could go over to kick Ben An Donner’s butt and become the greatest of all giants, but when he saw how big and powerful Ben An Donner was he ran back across the Causeway to Ireland.

Ben An Donner heard that Fionn McCool had come to Scotland and was none too happy. At home, Fionn McCool was sitting with his wife when he heard BOOM BOOM BOOM. When he looked out the window, he saw Ben An Donner coming across the Causeway. Fionn’s wife knew she had to do something and dressed Fionn up in baby clothes and a soother and put him in a baby cot. BANG BANG BANG-Ben An Donner was at the door. When Fionn’s wife opened the door, she put her finger to her lip and said “Shush-you’ll wake the baby.” Ben An Donner looked at the baby in the cot, not realizing that it was Fionn McCool dressed up and when he saw the size of the “baby” he thought to himself, “Holy S**t! If that’s the size of the baby, what size is the father Fionn McCool?” And with that he ran back to Scotland, tearing up the Causeway as he went.

Now some people will tell you that the Giant’s Causeway is made up of 37,000 black basalt columns which are the result of a massive subterranean explosion, but we know that is waffle and that the Fionn McCool version is the true reason it exists.

At the Causeway, we did a hike and Rebecca looked after Angie really well to make sure she didn’t collapse from all the exercise! The kids took fantastic photographs and the staff photo bombed quite a few! Aubrey said the views were “breathtaking” and John Paul just loved the Causeway.

We did a stop off for dinner in the beautiful seaside town of Ballycastle and when we arrived home, Rebecca put her new dress on, Peirce put his new jacket on, and the rest of the kids glammed up in their glad rags for the Saturday Night Disco. Garret had the moves and was closely watched by a whole crowd of Spanish and Italian kids who even though they tried, couldn’t copy the complicated moves-though Miles wasn’t too far behind.

Then it was bed check and lights out for another day.

Thought for the day: Although we visited a UNESCO site, the discovery of the day was not this but FANTA LEMON-check that out!