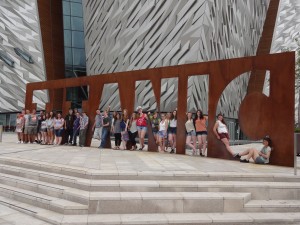 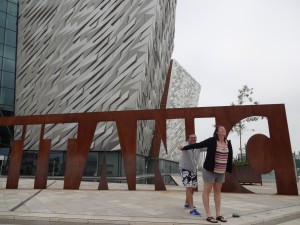 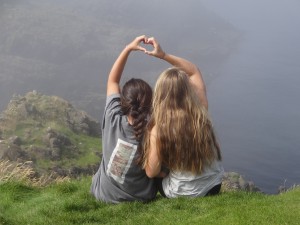 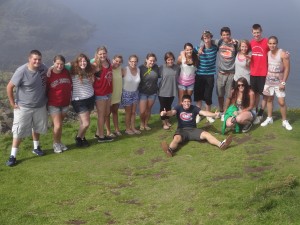 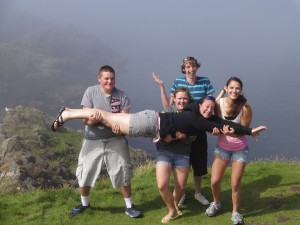 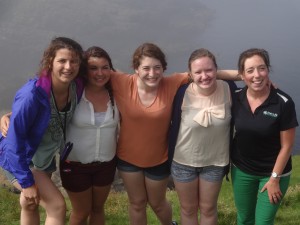 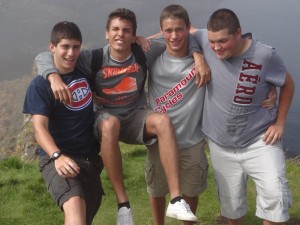 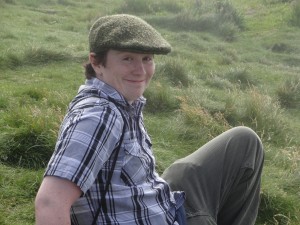 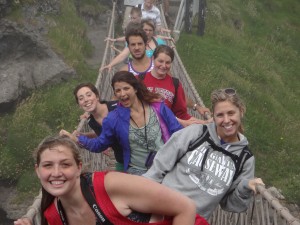 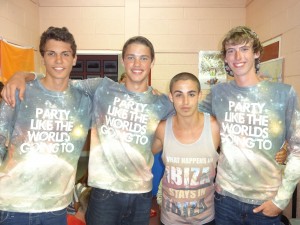 We had an early start this morning-6:00 AM, but the King’s Hospital Kitchen Staff pulled out all the stops with Cheerio’s for breakfast. We all enjoyed the meal in silence before hopping on the bus for the long journey north.

First stop when we got over the border was the new Titanic Exhibition in Belfast docks. This center was only opened last year to commemorate the 100th Anniversary of the ship’s maiden voyage. The exhibition exceeded all expectations. The highlight of the trip was probably a cool cable car style ride down into a recreation of the construction of the hull of the ship. There were loads more great features inside and fortunately there was plenty of Kleenex on standby for those students who were devastated by the unexpected sad ending.

As Belfast’s finest ambassador Anglea Mervyn explained, “She was fine when she left here.”

Angie was kind enough to point out her summer house to us as we travelled north to the Causeway Coast. The bus passed through Bushmills, County Antrim, home of the oldest (Legal) distillery in the world, but time constraints meant we couldn’t stop to sample the fare. Unfortunately, we had similar time constraints when we passed the Jameson Distillery in Midleton last week. I guess everyone will just have to come back to Ireland in a few years time!

After a delicious and nutritious lunch on the grass roof of the brand new Giant’s Causeway Interpretive Center, the group were ready for what is always one of the highlights of the entire trip-the Giant’s Causeway. All the students (At least those who paid attention in Dan’s history class.) knew that the Giant’s Causeway was built by a Scottish Giant called Benandonner so that he could attack the Irish Giant Fionn McCool. When Fionn saw Benandonner approaching, he was terrified by the size of his Scottish opponent, so he ran and hid in his house. Fionn’s wife dressed Fionn up as a baby and put him into their crib. Benandonner took one look at this massive baby and said, “My God, if this is the size of the baby the father must be huge.” With that, Benandonner ran back to Scotland tearing the causeway up behind him as he went. The students were smart enough to discount the childish rumours about the Causeway being made up by hexagonal basalt rocks which were formed when molten lava cooled rapidly towards the end of the last Ice Age. Just as well, because Dan was fortunate enough to find the very pacifier Fionn’s wife gave him. Or else a child dropped their pacifer earlier. Paddy said it was pretty cool and well worth the beautiful cliff-top walk.

Everyone had great fun clambering all over the Causeway, the Giant’s Boot, and the Giant’s Organ. Then it was time to move on to Carrick-a-Rede Rope Bridge. This is a tiny little bridge made from rope and planks of wood which were thrown out to a tiny offshore island by salmon fishermen. Now it features in most of the ads and brochures for Tourism Ireland, and with good reason. All the students and most of the ILE Staff were brave enough to make it out to the island and the beautiful views which emerged through the sea mist captivated everyone, especially Riley who enjoyed trampolining on the soft grass. Megan thought the sea birds were stunning, and she may even have spotted Ireland’s first ever wild penguin.

From Carrick-a-Rede, we stopped at Ballycastle where the ice-cream was great and the massively unhealthy biscuits were even better. A long bus ride home beckoned, but we had Taryn’s awful music to keep us company, so the time just flew. We were so tired by the time we got home that some of the girls were fast asleep before Angie got to sing her nightly lullaby-Pretty Fair Maid. The rest however, couldn’t resist the lure of the famous King’s Hospital Disco, where Seth won the MVP Award hands down, or hands up to be accurate.