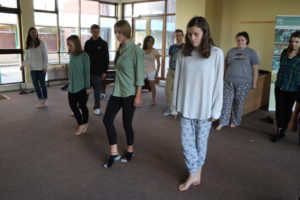 Rise and shine #ILE17! Saturday, July 1st, marked the first class day of the Program. Students woke up at 8:00 AM, showered, and made their way to breakfast. Cereal, fruit, orange juice, toast, and yogurt were set out for the group to devour this morning. With stomachs full, they were ready to put their thinking caps on and learn all about Ireland.

The first class of the day was a double Irish literature class with Angie. She talked about the history of Irish Literature, including myths and legends, the Renaissance of Irish Literature, and told the students they would be studying W.B. Yeats, Seamus Heaney, Patrick Kavanagh, and Frank O’Connor. Today the students started with James Joyce and his very colorful life. Tomorrow the students will be treated to a taste of Ulysses.

They then had a Dail (Announcements in Gaelic), followed by a Saoir (Break in Gaelic).

The next class of the day was Irish history with Michael. His class was an introductory lesson and he talked about the first settlers in Ireland.

Gaelic was next up with Scones and she gave the students their Irish names and then taught them the Irish National Anthem to prepare them, so they could sing it for the Leinster Hurling Finals the next day. Lauren said she is really enjoying Gaelic, but finds it very difficult.

After Scones’s class, the ILE Staff had an important orientation with the students and went over some basic rules of the Program, while also going over the calendar for the Waterford portion. They learned all of the exciting adventures they would experience over the next week. 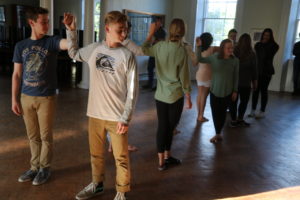 Dinner was next on the agenda with a delicious meal of chicken tacos. Then the students were treated to a walking tour of Waterford with Tyler, where they would familiarize themselves with the layout of the city. Anna T. said she really likes Waterford, because it’s such an easy city to navigate. The students spent the rest of the afternoon exploring, before they had to sign-in at 5:00 PM. They then had a delicious meal of hot dogs and french fries that were served for tea. A little taste of home!

After tea it was time for drama and dance. The students were split into three drama groups. One group was Michael Collins and Samuel Beckett, another was Eamonn de Valera and James Joyce, and the last group was Padraig Pearse and WB Yeats. The evening was spent learning about their assigned historical figures and then they were assigned the task of writing a limerick for the first week. The ILE Staff can’t wait to see what some of the students come up with over the next few days. They are always impressed with their creativity.

Drama went straight into dance with Counselor Casey. Casey made sure the students were well stretched before she instructed them on a few basics…, 3’s, 7’s, and “Rocking Horse.” The Irish dancers of Abby, Brigid, Bridget, and Rose demonstrated a few reels to the rest of the group and everyone was thoroughly impressed. Casey thinks that the Irish Life Experience might even have a few Riverdance potentials on their hands.

The rest of the evening was spent relaxing with students having a music session, watching Pitch Perfect, or writing in journals.

A wonderful day had by all-needless to say!