Another day, another typical breakfast. The kids munched on plain cereal and toast, wishing for waffles and pancakes. Afterword, Angie and Taryn taught a couple of morning classes before we embarked on our adventures for the day.

We loaded the bus at 11:15 and set out for Kilmainham Gaol, the location where Patrick Pearse and many of the Irish Rebellion leaders were executed. Our guide began us in the chapel where Grace Giffords and Joseph Plunkett were married before he was promptly executed a few hour later. We saw several cells in the oldest section, then moved into the wide, Panopticon-style atrium. Grace Giffords was later imprisoned in Kilmainham like her husband, and painted a moving image of the Virgin and Christ inside her cell.

In their Irish History class, the students have been covering the happenings the Civil War, which took place between June 1922 and May 1923. The ability to touch the very cell doors in which the figureheads were constrained, brought reality to the words studied in their history books.

We ate a lackluster packed lunch, making us miss the sweet cooks of Waterford, before our next tour of Glasnevin Cemetery. We got to see the final resting place of Michael Collins, known as the leader of the Irish War of Independence, and a few other historical figures. The serious tenor of the day brought forth a lot of emotions to our students, however, they continued to maintain their positive attitudes throughout.

We commenced the evening with dinner at King’s Hospital Cafeteria, then an hour of dance and drama. 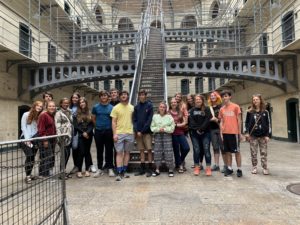 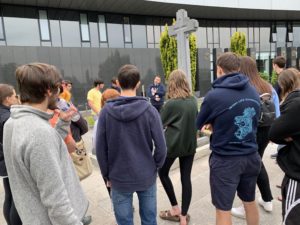 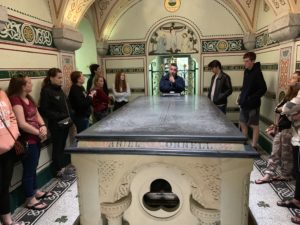 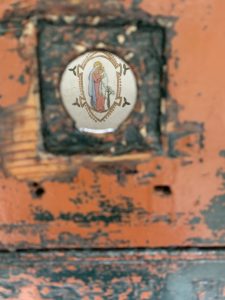